We had an absolutely wonderful evening last night at the ever-relaxing View Two Gallery. It's always strange to think, when sat there in the chilled out environment, surrounded by art, that down a few flights of stairs and out of the door is Mathew Street, Liverpool's home for revellers and merry-makers.

We arrived a little early which gave us chance to soundcheck (and spend half an hour tuning our now-ancient mandolin, which slips out of tune with so much as a look), have a cup of tea, and just relax.

We got a little chance to talk to Chris Callander and Esme Bridie before the show began; Louise Jordan then arrived after having had an epic - and not particularly fun - journey up to Liverpool! After her soundcheck, the event started, first with Esme.

Esme immediately wowed the audience with her lilting voice and assured guitar playing. Our favourite of hers was a song called "Dirty Hands", with some captivating chord changes. We would really like to go and see Esme play again. 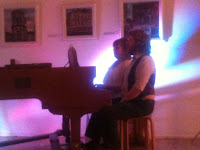 Next up it was our turn; we had brought along many of our instruments, but also made use of the gallery's wonderful grand piano. We played classic folk ballad Reynardine (Roud 397), b-side of our recent single, and then a selection of original songs, including a live version of (There's No Such Thing As) Wandering Stars, which we sat at the piano together to sing and play. Due to us both being sat at the piano, we went completely unamplified for this, but were told afterwards that our voices still carried. 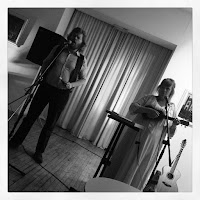 We played a variety of songs from our début album, Amateur Astronomy, including the title track from the album, and a shorter live version of our epic mediaeval-themed song, Stars and Moon and Me and You, Love, for which we used the psaltery unamplified; the sound is pretty loud even without a mic! We finished with an a capella song, When I Was Your Age, which is not currently available for streaming but is a bonus track on our album.

We had a wonderful time performing but were glad to sit down and grab a coffee!

Next up was Chris Callander. Chris' songs are honest and passionate and his guitar playing is pretty much virtuoso! We especially loved his wonderful song Ghosts of the Old Casartelli, and spent a while racking our brains trying to work out where the landmark was! A wonderful set, and we've thoroughly enjoyed listening to his CD today too!

Finally came the headline act, Louise Jordan. Louise is a skilled musician; a lilting pianist and fluid guitarist. Her voice is a joy to hear; she makes it seem so effortless and weightless. She played beautiful, interesting songs, many in that folk tradition where the telling of the history behind the song is as much a part of the act as the song itself. Hard to pick a favourite, but her musical interpretation of the AA Milne song, Rice Pudding Again, was strangely haunting for a lullaby.

We bought her latest album, Veritas, and played it in the car on the way home. It's fantastic, and we would recommend it to all of you.

We hope she got back safely and that she returns to Liverpool again, soon.

Thanks to everyone who came; thanks to Graham for putting on such wonderful acoustic gigs; thanks Stuart for the sound, and Ken at the gallery for holding the event; finally thanks to Esme, Chris, and of course Louise for the wonderful music!
Posted by Unknown at 09:13 No comments:

We've been blessed with another wonderful review of our début album, Amateur Astronomy, this time from prolific music writer, and poet, Ian D. Hall, at Liverpool Sound and Vision.

"...ample splendour offered by Moss & Jones..."
"...captures the imagination and asks questions of the listener..."
"...deeply profound..."
"In Amateur Astronomy they have one eye on the music of the past but also one foot in amongst the stars."

If you'd like to hear the music for yourself to see if it matches up to the review, you can stream it for free from Soundcloud or Bandcamp, and it's available from Bandcamp as a CD for £5+postage (Royal Mail: 95p in the UK) or as a digital download for £4. Both CD and download contain a bonus track not available for free streaming.

There seem to be two types of launch gig; those that are all-singing, all-dancing, a cracking line-up, a huge venue... and no CDs due to a miscalculation of the production time. I've been to more than one of these, and I think the problem is that to arrange something so huge, it has to be done months in advance, which means taking a guess at exactly when the CDs will be ready. I've always felt sorry for those musicians who've had this happen to them; arranged a magnificent gig only to have nothing to sell.

And then there's the other type; a low-key gig at a small, cosy venue. In order to avoid having no CDs, we opted for the latter. We waited for our CDs to arrive, then quickly arranged a free gig at a new-to-us venue in Liverpool called The Ethical Glass via a lovely chap called John who saw our 'venue suggestions please' post on the Liverpool Bands noticeboard on Facebook.

We invited everybody and were chuffed when a not insignificant number of people turned up to hear us. We appreciated people taking the time on a sunny Sunday afternoon to hear us play in a basement! That's dedication and we're tremendously grateful! There's nothing to quell the nerves like looking out and seeing friendly faces there in support.

After the Ethical Glass regulars played a lovely mix of country covers, we took to the stage. It's always great to turn up to a venue that has 'regulars' and some of them genuinely seemed to enjoy our set. We played some traditional folk songs, followed by playing the songs from our album, Amateur Astronomy, and its bonus track, too, utilising a large cross-section of our instrumental panoply, including psaltry, mandolin and treble recorder... and more.

Finally, because quite a few people clapped for a good long while at the end, we came back on stage briefly to play an encore; our folky version of 90s rave classic, Ebeneezer Goode.

Thank you so much to Mark at The Ethical Glass for letting us grace your stage, thank you to John for sorting it all out, and huge, huge thanks to everyone who came along to hear us play, and bought our music!

Our next gig is playing for Liverpool Acoustic in support of Louise Jordan, alongside Chris Callander and Esme Higgins, at View Two Gallery in Liverpool, in the evening of Friday 24th July. Tickets are available from WeGotTickets for £5.50 or on the door for £6.
Posted by Unknown at 02:37 No comments: