Ruth on: releasing a single the weekend after a General Election

I'm going to try not to be too political here (I've already done all that on Facebook, and twitter) but I think most people who know me know I could hardly be described as "over the moon" about the thought of five years of majority Tory government. I think many - possibly not all, but most - of our lovely macramist fans feel similarly.

The trouble is, that for various reasons, our single was ready to release just days after the UK's general election result, and in the end, we decided to go ahead with it. 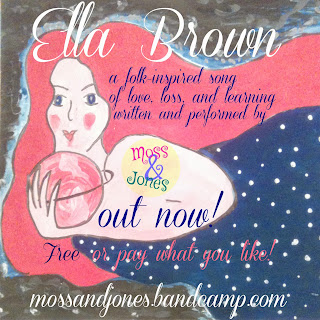 Ella Brown, the a-side (if you can say a digital download has an a-side) of our single, was in the pipeline for a very long time. In fact, the tune came to me about three years ago, before Moss & Jones even existed! I was singing traditional folk songs unaccompanied at open mic events around Liverpool, but had decided I wanted to try my hand at writing my own songs, and this was the tune I had. The new lyrics are totally different to what I had in mind at the time, and the bridge (heavily based upon Thomas Tallis' Why Fum'th in Fight?) is new, and of course, it's no longer unaccompanied. Obviously, three years is a long genesis for a song, and it's one of those songs that I've put aside and then returned to, fiddled with, arranged (with Marc) for various different instruments to see which worked best (on our recording there is melodica, ukulele and violin). We've agonised over the harmonies (was Marc's harmony too low to be loud?) and worked out which instrument to ditch when we play it live.

Not all our songs have been three years in the making, of course, but given that this one was, there was no way we were going to delay it once we had our b-sides ready.

However, we're also very aware that at the moment, the mood in many people's homes doesn't really suit a sweet but melancholy song, and more something angrily upset; a protest. Now, Ella Brown isn't a protest song at all; it's a sweet, melodic, wistful air about youthful love, and astronomy (sort of). However, Ella Brown is the song we've worked on and recorded, and to drop it at the last minute in favour of trying to quickly pen some kind of angry response to recent events would at best be a shame, at worst, seen as a cynical attempt to cash in on the recent election result in order to get new fans.

One thing we have done in the wake of the election is think about our pricing for this single. We've decided that we are going to stick with Pay What You Like, and license it under creative commons, so it can be shared around without the need for money to change hands. We're very conscious that people are skint already, and most are scared they'll be even more skint, so for the single release, we chose to make it possible for people to download it free of charge, should they so wish. Unfortunately, for the EP, we simply can't afford to do this (or we'd end up never being able to make music again) but we're still going to price it as cheaply as possible, and make streaming unlimited on Bandcamp rather than limit it to three plays before a fan has to pay.

In an odd way, releasing our single now, as planned, feels like a very small act of defiance. I'm not going to say "it's a protest in its own way" because it's not, and that's a bit insulting to those people who are protesting right now, but it certainly feels like we aren't going to let the current situation change our plans and change our music (though it may change anyway, organically, over time).

However, it's hard, because I don't think many macramists are in the mood to be particularly ebullient about music at the moment, which means fewer downloads, retweets, shares and so on. It's completely understandable too, and I'm not sure there's any way around it; we have to just accept that this isn't really a happy time in many people's lives, and people are obviously more interested in discussing politics right now than music. That said, I'm still glad we released it now, rather than waiting. Because if we'd waited, we could be waiting for five years, or even more.

And we're not going to stop making music just because of the Tories. ;)

If you'd like to listen to/download our single, it's on Bandcamp.
Posted by Unknown at 12:15