Every now and again a local music paper will claim that such and such an open mic event is "probably Liverpool's oldest". This is (usually) my reaction:

You see, I remember 1997, when I was a student at Liverpool Uni, and helped promote a poetry-only open mic event at Liverpool's veggie hangout, the Egg Café. The event changed hands shortly after I'd left university, and it started to welcome musicians, too; I moved to London shortly after that, and didn't attend for a good many years indeed, but it continued, changed hosts yet again, and by the time I started singing unaccompanied folk songs in 2011... it was still there. In fact, it was the scene for mine and Marc's first ever gig together, in 2012, when we were two people singing and playing some carols, rather than Moss & Jones. 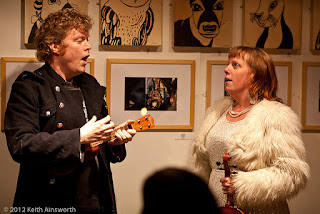 It's still going now, 18 years since I first started going. (In fact, it isn't the longest running open mic in town; that honour goes to the Dead Good Poets, at least, as far as I'm aware. But it's probably the longest running open mic that isn't just poetry.) It's changed so much in those years. Even in the last four since I started going again, I've seen a turnover of 'regulars' several times; sometimes it's students who come and perform for a year or so and then leave town on graduating; sometimes it's musicians in the early stages of their career who use the Egg's welcoming open mic as a starting board, and when they get a little more well-known, they go less often to open mic events; sometimes people just decide they prefer a different open mic, maybe one with a microphone, and take their friends with them. But new people always come and take their place; keep things going and busy.

And certainly since I've been part of Moss & Jones, Tony Kehoe has compèred the event, his idiosyncratic presenting skills including lyrics performed as poetry, in addition to performing his own songs. A friendly chap, Tony always encourages the audience to give performers - especially new performers - all their support. His exuberance might take a little getting used to for newbies but it's definitely worth it.

Last night, Monday 3rd August, included the usual mix of poetry and music; covers and originals; it's great to see Tony Kehoe's daughter continuing to develop her skills as a singer and musician; Tony had some new songs which we enjoyed; there were quite a few of us who'd travelled over from St. Helens so it felt like we had a bit of a gang there, though the atmosphere is always supportive anyway.

We played a couple of songs too and people seemed to like them; friends played new songs too and read old poetry and it was all marvellous.

One of the things I love about performing at the Egg is that it's completely unamplified. It's open mic in name only; a more appropriate phrase might be 'open floor'. It's great for us; that's how we practise of course, so we're very used to it. There's also no stage as such; performers are on the same level as the rest of the audience; they are on the floor, standing just in front of the people listening. For me that's a wonderful thing; it emphasises the fact that performers, too, are audience; there's no getting up and nipping to the pub for a pint once we've done our set; we stay, and we listen. Sans microphone and sans stage there are no barriers between performer and audience and personally, I really like that freedom.

On a practical level, not having to sing through a microphone means that I am able to move a little more too whilst singing and playing. There are no wires and cables to trip over, either, and the sound is solely determined by mine and Marc's performances, not partly by an engineer. That does, of course, mean that if performing at the Egg, it's wise to remember this, and if used to singing through a microphone, it might be wise to increase the volume a bit.

We now go to a variety of open mics, and play various full gigs too (this Sunday, we'll be back at the Bombed Out Church), but the Egg was where we started, it's my favourite café in town (I've been going since my late teens, so it's always been the Egg for me, rather than the Acorn) and we'll always go back to play every now and again... as long as they'll have us!